Though we are already nearly a week into 2019, I am only now putting together what we will call the Turkey Top Ten (or Twenty, or Three, there really is no plan here except approximating alliteration) memorable, meaningful experiences/things from our time here so far, in no particular order and with some makeshift categories attached.

Yes, Meal #2, the giant plate of meat is Josh’s favorite so far, though I enjoyed it very much, especially the array of grilled veggies and bread.  This was at Duveroglu restaurant (near the Bilkent Center Mall, so walkable from campus).  The platter has various forms of grilled and spiced lamb, chicken, beef.

Friends took us to my favorite meal, Meal # l, so far at Devrez (Küçük Esat Mahallesi, Esat Caddesi, No 143/A, Çankaya, Ankara), where we were told they just dump the salad on the table, and, in fact, they just dump (well, very nicely place) beautiful greens and tomatoes on a plastic bag in the middle of the table. I’ve never seen Josh voluntarily eat and enjoy a salad so much– I guess it was the eating with our hands? I highly recommend serving salad this way!

We had delicious lentil soup that reminded me of the hearty, simple, filling lentil soup from Zaytoons I would eat three times a week when I lived in Carroll Gardens, Brooklyn, picking it up on my walk home from the subway.  A generous portion in a paper to-go tub, with hot pita bread wrapped in foil on top.  It cost no more than $5, possibly $3?  And…I’ve just learned through a google search that Zaytoons closed this past November, 2018.  And that it opened the year I moved to NYC, 1998.  Here’s a local, neighborhood blog post about it with some nice pics and memories: https://pardonmeforasking.blogspot.com/2018/11/say-it-isnt-so-zaytoons-on-smith-street.html

The news of this closing, while sad, makes me feel connected to, or less disconnected from, New York City. If I had learned it closed several years ago, rather than so recently, the Carroll Gardens I knew and inhabited would feel irrelevant, erased, forgotten, no longer part of people’s footpaths and patterns.  I can share in the end-of-an-era sentiments from afar- the place mattered to me, it mattered to others.  It appears my favorite Smith Street restaurant is still open, Café Luluc, phew!

Best Single Food Item Dangerous to Have in the House 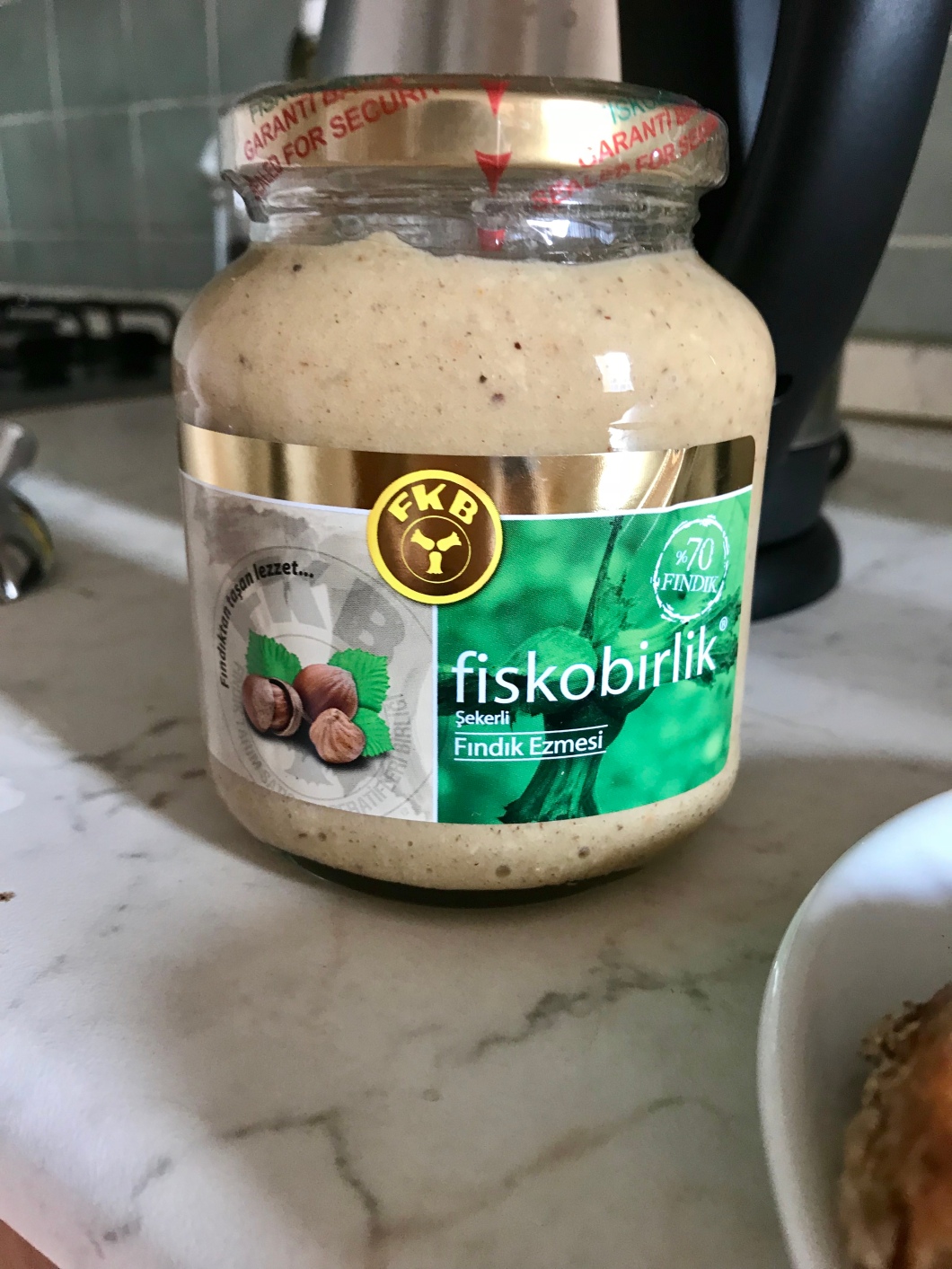 There it is: Hazelnut Spread or Nut Butter.  But not the mocha-downed nutella beloved by children and smothered on bananas the world round.  This is all hazelnut.  Well, 70% hazelnut–and 30% sugar. Hence, the deliciousness and the danger.  Before I realized that Sekerli meant “sugary” (which is truthfully only just now), I thought I had found nutty, healthy heaven.  We were going through jars.  I once resorted to eating it directly with a spoon when there was no form of bread or nut spread delivery item. Now its a rarity, though it is available EVERYWHERE as Turkey is responsible for 75% of the world’s hazelnut production and hazelnuts have their own PR firm, website and government agency, I think.

This mod beauty sat beside us on the wood stove in a café in Ulus.  There are double kettles lost of places, but this one wins for design and vintage flair.  From now on, this will be the blog’s spirit kettle.

This Turkish coffee was in the same café with the glorious double kettle above.  Its only the second one I have ever ordered, and I made a big mistake in asking for milk in it.  The waitress and folks at two other tables had to convene over my request for milk, which was hard to understand not because of the language barrier but because it made no culinary sense. In fact, I can say milk —”süt” —and said it proudly and loudly, expecting a smile of recognition and praise for my minor Turkish triumph.

Instead it elicited looks of horror, consultation with locals, and the arrival to our table of this affront to Turkish coffee that I insisted be conjured up, served with milk poured in, sending the contents spilling over the elegant and lovely cup and into the saucer.

I found this anectdote from another Turkish coffee/milk offender ( in Istanbul) which supports my view that I had made a terrible coffee faux pas:

I asked him to bring me the coffee and a cup of milk separately, so that I could prepare it myself. He replied that Turkish coffee should never be mixed with milk, and that the only coffee you can drink with milk is instant coffee, which, incidentally, isn’t really coffee…..

My ordering of the coffee with milk was the culmination of quite a bit of coffee confusion, which I am only getting a handle on still.  One thing to realize is that coffee is not consumed in quantity here.  There are no 32oz Dunkin’ Donuts to-go vats, or Starbucks super-grande cups that are two feet tall.  Drip coffee just does not really exist.  Most coffee drinks are espresso- based, like in Europe.  EXCEPT, and this is confusing, INSTANT COFFEE is everywhere, and is the drip coffee, mass quantity substitute.  At events and receptions, there is usually hot water, tea bags, and instant coffee, which I have an aversion to based on a completely unfounded and unearned North American coffee snobbery.

At this cafe’ I really wanted a full cup of brewed coffee.  We had arrived there after an unexpected but required trip into the city to process my residency papers.  As I took steps closer to making my Turkish residency extended and legal (which was a success) I was craving comfort coffee, the taste of home.  So in my weary state, I specifically ordered DIBEK coffee from the menu, making up a story in my head that DIBEK was Turkish for “drip” coffee (because of the same first letter you see) and that it definitely was not instant coffee.  And I wanted my made-up drip coffee with milk.

First sip I could tell that milk had no place in this already crowded cup.  I mean, it was still good, and the presentation with glass of water and Turkish delight has so many permutations, its exciting to see how each place will serve the coffee.  But I think I wanted an endless mug of diner coffee at that moment.

After some web-sleuthing, I’ve learned that DIBEK coffee is a style of preparation, wherein all coffee ingredients are ground by hand using a mortar and pestle, and that the coffee is made right in the cup, not in the typical Turkish coffee pot. I’ve also learned that there are several variations and versions of Turkish coffee, even some that include milk.  And regions, cultures and peoples make coffee with methods similar to, but distinct from, Turkish coffee, and that these differences are important and even political.

Best Beverage at the Right Time

I had my first—and only so far—cup of Sahlep on Tunali Street, on the spur of the moment with a friend, after walking up and down the street in the rain, in search of some gift shops that sold traditional Turkish items.  My feet were soaked before we even got on the bus at Bilkent to go into town, and they only got soggier and colder on the grey pavement in the drizzly late afternoon as we sought out stores that never materialized.

My feet were so cold I was about to buy myself boots from one of the many nice shoe stores we were passing.  I had already accidentally stolen an umbrella from the Migros before rushing to get the bus.  A posse of three employees, including a manager, walked me to the umbrella offerings, which were meager, and I picked a small one with some frilly edging because the others were mostly ginormous golf umbrellas.  When I went to check out, the clerk asked me (in Turkish) if the umbrella was mine.  I nodded/conveyed yes, innocently responding that it was my item in the queue that I meant to purchase. She of course meant did I already own it, had I brought it into the store with me. (This took a lot more time and hand gestures).  When I realized she was not charging me for it, it was too late to do the right thing, because I would have missed the bus after navigating a bi-lingual re-ringing situation. So I took the umbrella and scrammed.

All that is to say, I arrived in the city soggy, cold, rushed and grumpy. When it became clear we would not find the shops, we sought out warmth and comfort in a cup of Sahlep, a drink made with orchid flour!  From https://www.giverecipe.com/turkish-sahlep/:

We sat in the cozy outdoor but enclosed section, right next to a heat lamp.  I took off my shoes so my socks could dry and hid them and my shoe-less feet under the table.  The creamy, frothy, cinammon-sprinkled drink arrived, think, warm, a hug in a mug. It tasted to me like something made with condensed milk, but starchier.  I definitely could not drink it everyday, or often, but I think I drank it under precisely the correct circumstances: needing to be warmed from the inside out, fending off some sniffles, seeking something yummy and medicinal (the orchid flour is said to have many health benefits!) Happy Ending!